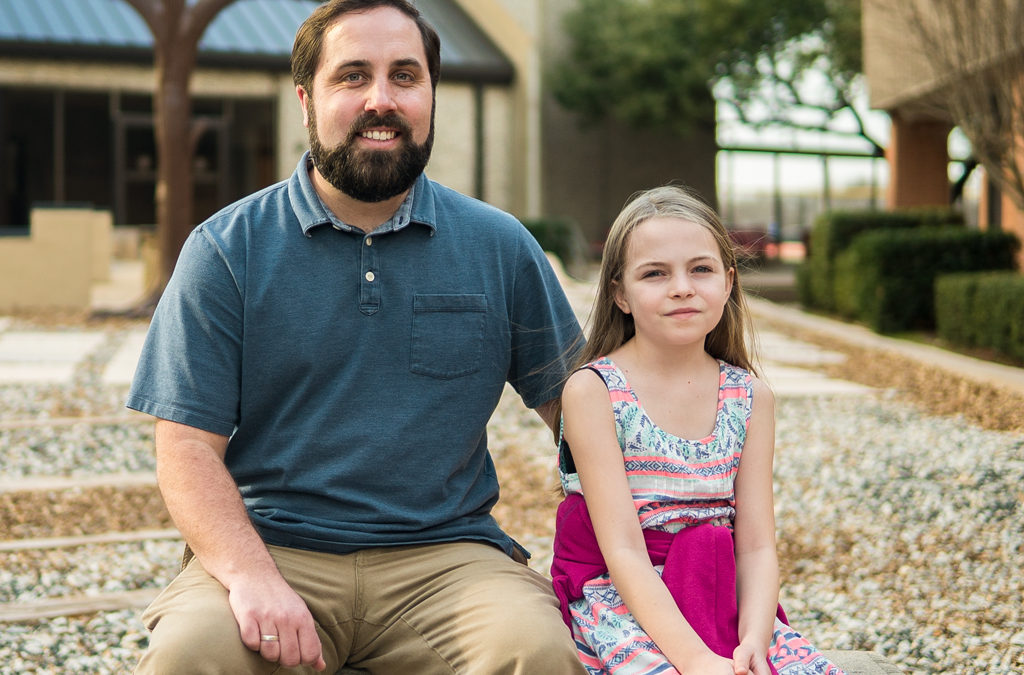 Andy Heisler made his first trip to Texas in May of 2014—for his DCC graduation.  It was his first trip because all his DCC work, basically the last half of his degree, had been done through DCC’s FLEXcampus®.

“Graduation felt like a reunion,” he says, “because the sense of community that had been built in the online format was real. FLEX really is distinct.”

In town this week to attend a ministry workshop at Compass Christian Church in Colleyville, Andy, accompanied by nine-year-old daughter Sofie, came by campus to share with Dr. Hahlen’s mentoring group February 6 and 7.  While Sofie happily read a book in the corner, Andy shared about his experience in discipleship ministry with Newberg Christian Church, Newberg, OR, and about the perils of being married and in school at the same time.  Andy and wife Jenn married while in Bible college, so he knows the ropes.

Andy grew up in Oregon, first in Beaverton, attending Somerset Christian Church, and then in Hillsboro, at Singing Hills Christian. His parents gave him a solid foundation in faith, his dad leading him to the Lord at age ten.  The Christian heritage goes back to grandparents who “chose Christ and changed the trajectory of the family,” which has many ministers and missionaries among the aunts and uncles.  Andy’s brother and sister continue in the faith today as well.

Andy, however, did not intend to enter fulltime vocational ministry—“Not me,” he says.  But he did go to Puget Sound Christian College in Seattle, where he and Jenn met.  They soon were married and left school in order to work, volunteering at a small church with the youth and worship ministry.

Even at Puget Sound, though, Andy knew God was calling him to ministry, and the passion only increased.  So after a few years of working, he and Jenn moved to Boise, Idaho, he could attend Boise Bible College, serving with Caldwell Christian Church, in Caldwell, ID.  They had family by this time, Avery, now 14, and Sasha, now 12, so after completing the Associate of Arts, they moved back to Oregon to be on staff at Newberg, where they have been now for a little over ten years.

During this time, he began to look for ways to complete his degree at a Stone-Campbell-movement college.  “I did the spreadsheet approach,” he says. “With my first call to DCC, the admissions people were so helpful that it really stood out, the sense of community.  And then FLEX stood out, having not only the online dimension but the interpersonal and real-time connection and community—three dimensional.”  He enrolled in 2012, completing the B.S. in ministry and leadership in 2014.

Meantime they have continued to work with Newberg and also homeschool their five kids, who now include Titus, 6, and Norah, 4.  They’ve also added Darby, the mutt, and more recently, Pollyanna, the cat.  When asked whether they live in a log house they built by hand, Andy laughs and says no, but then adds, “We do live in a two-story wood house built in the late 1800s.”  It’s on three acres, where his in-laws also have a house.  The kids thus not only have the advantages of outdoorsy stuff but also the nearness of grandparents.

When asked about the best times in ministry, Andy immediately replies, “Journeying with men, seeing them grow as husbands and fathers, and finding creative ways for them to grow.”  An annual five-day men’s retreat in Oregon’s high desert is always a highlight of the year.

“Discipleship and pastoral care are always exciting, with new opportunities and new challenges,” he says. “It always feels vibrant and fresh.”

DCC is blessed that FLEXcampus® brings students like Andy our way. (And if God is hammering on your heart, perhaps now is the time to FLEX your mental and spiritual muscles. Check out http://www.dallas.edu/flexcampus/ )