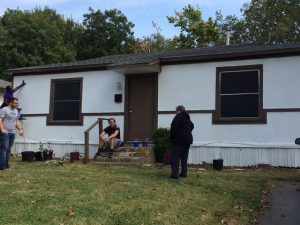 Each semester Dallas Christian College engages all students (and faculty and staff) in a day of service to the community.  On October 13, 150 students, 19 staff, and one alum worked at 13 sites in Carrollton and Farmers Branch.  Our teams repaired homes for 8 senior citizens, sang and shared joy at three nursing or special-care facilities, and served the City of Farmers Branch in the historical park and the John Burke Nature Preserve.

Kent Arrington and Gary Adams had made all the arrangements.  But one location had to be cancelled at the last minute.  Perhaps God wanted to add one himself.

Instead of going to the planned site, Gary and his group found themselves at a site not on the agenda—a home that needed painting and repairs on the outside.  When they had completed the repairs and put 2 coats of paint on the exterior, Ms. Beltran cried in appreciation.

Then she asked Gary if he would take a look at her water heater.  She had had no hot water for months. Gary looked at it and found out it wasn’t something he could repair but it didn’t leave his mind.  Gary called the plumber we use at DCC, who went over and looked at it and said it needed replacing. 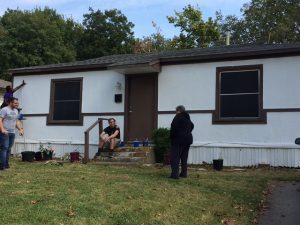 Gary couldn’t let it go.  He called the plumber back and said “Do it.”  Gary told several of us this story and you guessed it…we are on board, too!  The plumber installed a new water heater for her, and Gary told him to send the bill to Gary personally.  The bill was minus several dollars, which Ethan of Wade Plumbing donated.  Gary, Kent, Patrick our chef, and several others are donating money towards this need for Ms. Beltran.  She wants to come see our campus! 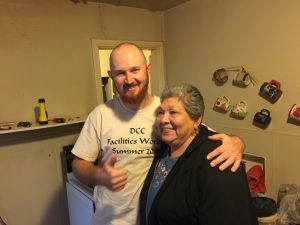 At the completion of the repairs, Gary asked one of our students, Stephen Waweru, fluent in Spanish, to lead in prayer.  Ms. Beltran (pictured at left with Jason) could understand English a little, but Spanish was her first language.  Stephen prayed each sentence in Spanish, then the same in English.  More tears from Ms. Beltran, and probably others there, too.

Another great part of this story: Last year there was another lady we helped.  She has been coming to the campus ever since to volleyball games and to the Christmas Dinner Theater last December.  Kent and Sue Arrington and others have kept up with her throughout the year.  Recently, they were visiting Mrs. Jernigan and discovered that she quilts.  She doesn’t ever know whom she is quilting for, but Kent told her the story of Ms. Beltran, and Mrs. Jernigan handed him the quilt she had just finished and said, “Guess I was quilting this one for Ms. Beltran.”

This location wasn’t on the schedule.  Thank you Lord, for leading us where you want us to be.

Dallas Christian College Service Day is a day that can last a lifetime.

Dottie Farley is the executive assistant to the president.